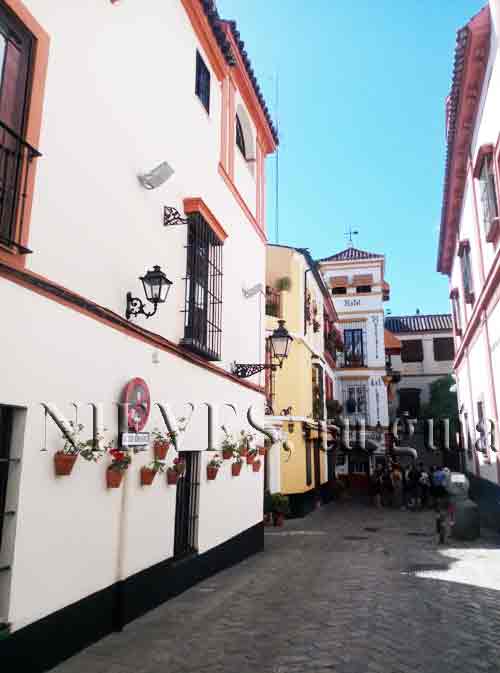 It is the best-known neighborhood of Seville, an old Jewish quarter, scene of many legends. Its urbanism of Islamic roots, its narrow and winding streets, its peaceful squares, its green patios … A delight that later reforms failed to undermine.

There are still few remains of the wall that closed the Jewish quarter in a vain attempt to protect the Hebrew community, finally forced to leave the city. Of its three synagogues two are preserved, both converted into churches (one of them, the baroque jewel of Santa María la Blanca).

A neighborhood to walk through its squares: the Plaza de Santa Cruz (presided over by its magnificent seventeenth-century locksmith’s cross); Dona Elvira’s (where the fountain sings); that of the Columns (the most romantic); that of Refiners (remembrance of Don Juan Tenorio and his impossible love); that of Santa Marta (the most isolated); the square of Alfaro (with its “opera” balcony).

A neighborhood to see old manor houses such as Miguel de Mañara’s, the Altamira palace, the Padilla’s House  and the Marqueses de Dos Hermanas’ (both are part of a hotel at present), Casa Salinas or Casa Fabiola, between others, which stand out in a labyrinth of small houses clustered in narrow streets.

Not forgetting the convent of “Las Teresas”, founded by Santa Teresa de Jesús herself during her stay in the city, or the House of Murillo, residence of the Sevillian painter.