The Alcazar of Seville 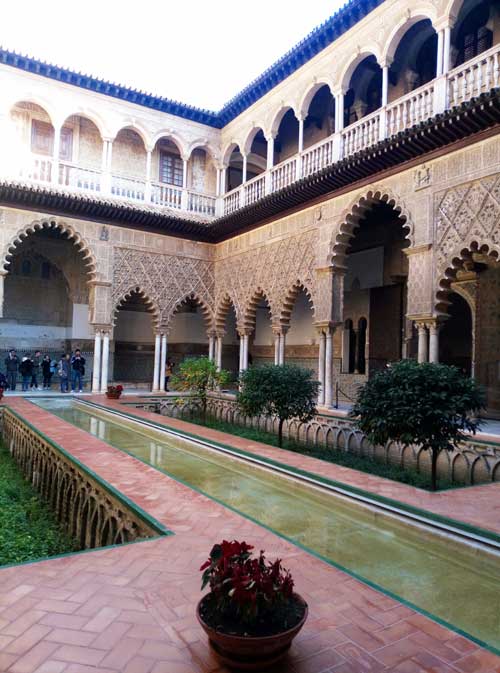 This is another of the tourist visits that you should not miss in your stay in Seville.  El Alcázar de Sevilla was declared a World Heritage Site by UNESCO in 1987. The alcázar (fortified palace) fascinates visitors with the impressive originality and beauty of the Mudejar Palace of Pedro I, the building that attracts all eyes, and where numerous movies have been filmed.

But a view of the Alcázar is much more than this: the remains of the Islamic era (9th-12th centuries), such as the walls and the decorative Patio del Yeso; the gothic palace of Alfonso X the Wise, later transformed into halls for royal parties; the Hall of Justice, one of the oldest examples of Mudejar architecture in the city (Alfonso XI); the badly named “Baños de María de Padilla”, where Pedro I was relaxing in the company of his lover; the rooms where the Catholic Monarchs lived and Doña Isabel gave birth to her only son, or where she had long conversations with Christopher Columbus.

The House of Trade (founded by Isabel), with the Hall of the Admirals, where a beautiful Virgin of Navigators embraces under its Renaissance mantle sailors and governors involved in the discovery and colonization of America;

the reforms and buildings financed by the Emperor Charles I, who chose the city for his wedding with Isabel of Portugal … A palace that has never lost its role as a royal residence and has been re-arranged by each monarch with the best of each era. Without forgetting its extensive and leafy gardens: to get lost (there is even a labyrinth!).

It is important to note that it is one of the most visited monuments of our city so you should book the visit well in advance because there are usually long queues waiting for access to the monument, which you will avoid by hiring this visit with Nieves, your guide to Seville, since being an official tourist guide can offer you a preferential access, avoiding the long queues that most of tourists suffers.